We recently had our first snow storm in NYC, and wow, did it make a mess out of the city! Nothing takes the magic out of snow away like sitting in traffic on unplowed streets for hours and hours! The weather inspired me to create a gray skied manicure with a lovable icon of Christmas to try to bring the wonder back.

I started by painting my nails gray with Laguna Moon Classic Soak Off Gel Polish in color CL064. Because I was using gel polish, I applied 3 very thin coats cured at one minute each in a UV/LED lamp.

3 coats of Laguna Moon’s CL064 shade turns your nails into a chic gray with the added reinforcement of a gel polish.

My initial plan was to mostly use stamping techniques for this manicure, although things did not go exactly according to plan for me as you will soon see!

The simple part was stamping the snowflake design with Ya Qin An Stamping Nail Polish in White.

The snowflakes on their own already look very cute, but this manicure is about to go a giant leap further with an accent nail design.

The reindeer proved to be fairly challenging for several reasons. For the initial stamping, I used Born Pretty Stamping Nail Polishes in colors #486 (tawny pink) and #15 (dark brown), taking care to apply and scrape the colors on the plate so that they would not bleed into each other. I then proceeded to color in the image with Sally Hansen Hard As Nails Xtreme Wear in Cherry Red for the mittens, nose, and cheeks, Ya Qin An Stamping Nail Polish in White for the belly, Pretty Edgy by Essie for the scarf, and Ya Qin An Stamping Nail Polish in Black for the eyes, eyebrows, and mouth. This was more painstaking to do than usual because every color shows through the tawny pink shade of the reindeer due to its thin layer of polish. If you do not fill in the sections perfectly, the tawny pink will not look consistent once it is transferred, and the image will look like a sloppy mess. Very fine detail brushes were used to color in each element, making this task feel as if I was painting freehand.

Because shade #486 was somewhat translucent, I tried to help it pop by applying a layer of Ya Qin An Stamping Nail Polish in White all along the backside before painting some top coat over the entire design and allowing it to dry. However, after transferring the decal to my nail, I found that the color still was not pigmented enough to my liking. I tried to re-stamp just the tawny shade over the entire decal to give it a second coat of polish (thank goodness for clear stampers!), but I didn’t line up some of the details exactly right and had to color in EVERYTHING all over again (meaning the red, green, and black parts). What a frustrating ordeal! By this point I decided to paint in the lines of the scarf with the black polish because why not? I think it looked better like this, but wow did I wish that I didn’t have to color in everything twice! There was way more freehand work involved with this manicure than I intended there to be!

I ended up placing Rudolph on my middle fingernail because it was the only nail long enough to accommodate the entire design. The mittens both made the cut, although they’re not visible at this angle, but you better believe that I wasn’t about to let any of the hard work I put into making Rudolph come alive go to waste! 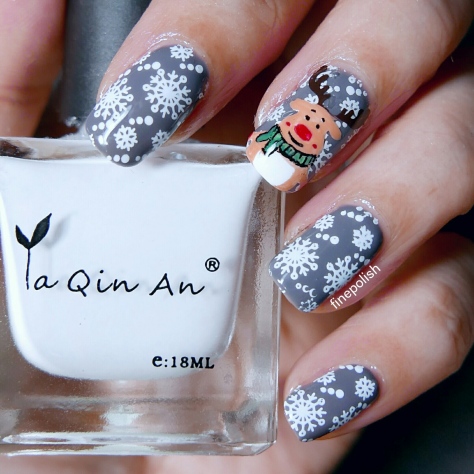 In the end, Rudolph does look pretty cute, and the attention to detail pays off. Hope you enjoyed this creation! Happy polishing!

I'm Chrissy, a professional musician in NYC and self taught nail artist. All nail art designs shown here are done by me unless otherwise stated. If you wish to share any of my photos, please publish them with credit given to my account @finepolish (Instagram/Facebook/YouTube/Twitter/Tumblr). Thank you, and happy polishing! For inquiries, please contact me at finepolish@yahoo.com